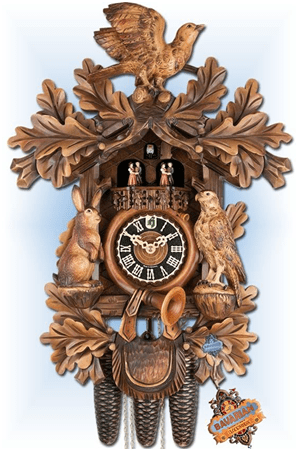 To some out there, the definition of a cuckoo clock might seem self-evident. In essence, some might have a preconceived notion that if a clock has a little bird in it that sings every hour or half-hour, or maybe even plays music, then all of the boxes are checked off.

In truth, there is much more to most cuckoo clocks than initially meets the eye. There are many details hidden in the rich history of clockmaking in the Black Forest region of Germany. These finer points simply cannot express themselves in one superficial detail. A defining feature of many cuckoo clocks is that they do contain a small bird that sings, typically on the hour and at the half, but with a closer look the cuckoo clock begins to reveal many pleasant little surprises courtesy of its Black Forest maker. The question is then, what is a cuckoo clock? Or, more specifically, what is a  Black Forest Cuckoo Clock?

Perhaps most often you will see the term more carefully fleshed out as “Authentic Black Forest Cuckoo Clock ,” and the prescription for this is adequately described by the Verein die Schwarzwalduhr, or the Black Forest Clock Association.

In order to meet VdS certification standards, a cuckoo clock must meet a number of requirements. In the first place, and perhaps most obviously, the clock in question must be made by hand in the Black Forest region of Germany. This includes every single piece of the clock involved, from the wooden case to the mechanical movements inside the clock. The only exception to this rule is the music box. The musical movements are typically sourced in Switzerland. The VdS makes this exception as Swiss music boxes are world renowned for their quality and craftsmanship.

That’s another thing - in the past, the clockmakers who made the traditional clocks coming out of the region made them entirely out of local woods. In part, this was because must do is a good master, and necessity is the mother of invention. They used what they had, and wood is plentiful in the Black Forest. Historically, these clocks were entirely made of wood including the gears and internal components of the movements.

As you might imagine, wood, even the strongest and hardest of woods, is far inferior to maintaining its shape and in wear resistance to most metals. Over time, clockmakers made the shift to metal internals and gears for their clocks. Today, the Black Forest Clock Association certifies authentic clocks with internals made from brass. These brass movements have been produced and assembled entirely in the Black Forest since their infancy in the late 1860s.

In addition, and as mentioned, the case of the clock must be made from wood and built by hand. Typically the general shape or outline of the case can be cut from stock with a band saw and then the final details carved by hand. As we continue you will learn more about the stylistic differences between different categories and types of cuckoo clocks. Many of these examples display an impressive attention to detail.

In summary, to qualify for VdS certification a clock must be entirely handmade in the Black Forest region and must contain a mechanical movement. Even so, there are some overarching categories of different styles of cuckoo clocks that share some features in common. One thing to note is that some clocks still qualify as an Authentic Black Forest Cuckoo Clock even if they do not contain some of the features with which many people associate cuckoo clocks. This will become apparent as we investigate some of the different, more popular styles.

Traditional clocks often feature a rich, dark wood stain and very ornate carvings that celebrate the bucolic heritage of the region in Germany that so intensely color their history and creation. Many traditional cuckoo clocks showcase themes of nature and the wilderness, along with the heritage shared by woodworkers, sportsmen, and others from the region.

For example, it is very common for traditional clocks to feature engravings of trees, forest scenes, flowers, or leaves and other native fauna. Birds, bears, trophy bucks, and other wildlife are commonly represented among the relief scenes of many traditional Black Forest clocks. Oftentimes, the spoils and implements of the hunt are richly carved into the case, along with other related details.

Traditional clocks are not only richly stained but often colorfully painted, which is also crafted entirely by hand. Another common element of their style is the cast-iron weights that they use to power their movements, that typically take the likeness of pine cones. Occasionally clockmakers will carve wooden weights to further enhance the look of the clock too.

Ultimately, if you see a cuckoo clock that includes elements in its design that are geared toward the rural heritage of the Black Forest, it can likely be classified as a traditional cuckoo clock. Overall, these are some of the most popular cuckoo clocks, and here at Bavarian Clockworks we offer many traditional clocks from well established clockmakers such as Hones, Anton Schneider, Adolf Herr, Hekas, Rombach & Haas, and others.

Another very popular category of clocks comes in the form of Chalet style clocks. For these clocks to be certified authentic, they might meet all of the requirements aforementioned. However, in terms of their design and appearance they are somewhat distanced from traditional style clocks.

They are still carved by hand and may be just as richly detailed, but whereas traditional clocks make the most of wild influences, Chalet style clocks depict scenes of life in the Black Forest, farm life, and social scenes at the local Bavarian biergarten. Whereas a traditional clock would showcase a black powder smoothbore alongside a hare and some fowls, a Chalet style clock is going to present some of the fineries of village life.

There are several different subcategories into which Chalet style clocks can be organized, but in general, they feature the scenes from civil life. Anywhere among the richly decorated scenes of one you might be likely to encounter a miller or sawyer about his work, or some villagers leisurely enjoying some authentic German ‘Bier.’ In addition, they typically feature a balcony around which little carven characters dance to the music after the cuckoo chimes. 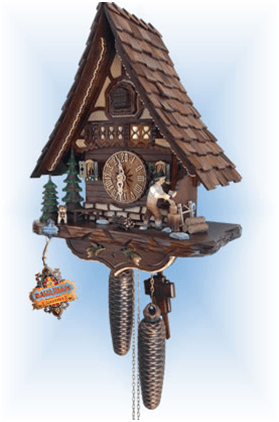 To further define Chalet style clocks, one can break them down into “Black Forest House”, “Bavarian Beer Garden” and “Swiss Alpine House” styles, each of which has its own subtle characteristics.

Black Forest House style Chalet clocks are just what they sound like. Oftentimes they showcase a private domicile with an overhanging roof. Typically they feature a few scenes from domestic life that would be common in the region and are richly decorated with details of that lifestyle.

Bavarian Beer Garden style clocks, like the former, feature a design that falls into line with the name. They feature denizens of the region enjoying the fine cuisine and company of the region. Characteristically, they depict scenes that one might experience at a Biergarten, including, unsurprisingly, local figures enjoying the brews.

Swiss Alpine House style Chalet clocks usually have very steeply slanted roofs as features of the houses they depict. These roofs would have been common in some alpine regions with heavy snowfall as the sharp angle of the roof would shed snow.

You can find several examples of each of these styles of Chalet clocks in our online collection, and the best way to pick out the best one for your setting is to get acquainted with the fine designs of some of them. Take a look at our page on Chalet Style Clocks as well as our Guide to Buying a Cuckoo Clock while you’re evaluating your options.

While Chalet Style Clocks and Traditional Style Clocks are very popular, there are many other styles of clocks that we offer on our website that follow somewhat different futuristic guidelines.

Vintage reproduction style clocks, also known as Antique reproduction clocks, are clocks that are designed after styles that were once more popular. Many vintage reproduction clocks mimic the styles that were popular in Europe at the same time as the height of popularity of the Baroque and Rococo schools of design. Characterized by extremely fine detailing for its own sake and extremely intricate patterning and carving, Baroque and Rococo clocks are very involved and ornate. You can see some illustrations of some of these clocks on our page of Vintage Reproduction Clocks.

There you will find some elements in common. Extremely fluid, graceful lines and floral motifs are common with these styles of clocks, along with elegant and highly involved patterning that requires immense skill to produce.

Many Shield clocks can also be classified as vintage reproductions because they are reproductions of an earlier style. In fact, shield style clocks are one of the oldest styles of cuckoo clocks still produced, and even more interestingly, sometimes they even lack a cuckoo bird as part of their design but still have that familiar chime on the hour that accompanies the cuckoo.

Shield clocks were in production as early as 1750 which makes them one of the oldest styles of clock in this list, although stylistically they are a bit different from the styles mentioned so far. Shield style clocks take the form of a square case with a semicircle atop it and are only decoratively and colorfully painted. What they lack in the ornately graven designs of traditional cuckoo clocks, they make up for with their bright colors.

Some popular styles of shield clocks are the miniature style shield clock which is also known as a Jockele clock, as well as shield clocks that do not contain a cuckoo. Keep in mind that some shield clocks contain other characters in place of the cuckoo bird. Here we offer many shield clocks from Rombach & Haas, Hones, Hones, and other clockmakers. 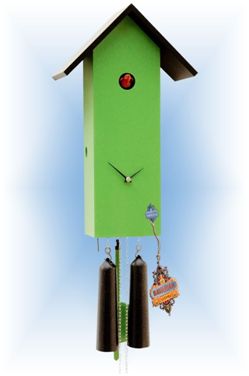 While many modern cuckoo clocks are aesthetically very different from the other styles we have shown so far, many of them are manufactured according to strict standards, are handmade with mechanical movements, and thus qualify for VdS certification. If a modern cuckoo clock meets these requirements, it is considered an Authentic Black Forest Cuckoo Clock.

However, many of them are made with newer movements such as quartz or digital movements and take batteries. In a lot of ways, a modern cuckoo clock can fit into many different environments for which a traditional clock might not make the same seamless fit.

Many modern cuckoo clocks represent a geometric or minimalist take on traditional designs, while others pay more of a tribute to these past influences. A modern clock can give you the freedom to pick and choose between design aesthetics you prefer in a cuckoo clock. Whether you prefer the traditional elements of hunter clocks or chalet clocks, or something entirely more art-nouveau style is up to you.

Some popular styles of modern cuckoo clocks are Classic Cube, Modern Carved, Diamond Shaped, Birdhouse, Modern Carved, and Quartz, though there are others. Check out our page on Modern Cuckoo Clocks to learn more.

Keep in mind that that much more could be said of or written about each of these different styles of clocks. To learn more please take a look at each of our pages for these styles to discover a bit more about them, and we encourage you to consult our buying guide, a link to which appears just above in this article.

If there’s something that defines Bavarian Clockworks other than its stunning collection of cuckoo clocks, it’s our sincere dedication to our customers. If you want to know more about a particular style of clock or would like some advice, please don’t hesitate to contact us. We are just a phone call away at 800-950-6753; we look forward to hearing from you.