If you’re looking to WOW your guest at your next dinner party; this is the recipe for you!  This Black Forest Cake will not only encapsulate one’s mouth in a decadent flavor of dark chocolate, cherries, and sweet cream, but will also be a conversation starter.

Handful of dark cherries
Sprinkle of icing sugar
* For home-made buttermilk: Pour 1 cup of milk into a bowl and squeeze in the juice of one lemon or 2 tablespoons of vinegar. Mix and let sit for at least 5 minutes.

** if serving to children, do not use kirschwasser but instead a cherry juice.

1) Pit all of the cherries and place in a bowl with ½ Kirsch. Cover with wrap and let sit overnight to soak.
2) Preheat oven to 350°F. Line the bottom of three 9 inch round cake pans with parchment.
3) Mix the cake’s dry ingredients together in a bowl.
4) Place the shortening and sugar in a bowl and with an electric mixer, cream together till peaks start to form. Add the eggs and vanilla - mix well.
5) Alternate mixing in a bit of the dry ingredients and the buttermilk to the shortening mix to well combined.
6) Pour cake batter evenly into each of the 3 pans.
7) Bake for 20 minutes or until a tooth pick comes out clean.
8) Place the cakes on a cooling rack and make some holes in the top of the cake with a toothpick. Pour 1/2 cup of the Kirsch liquid (from the bowl of soaking cherries) onto the cakes.

1) Place butter in a bowl and beat with an electric mixer till creamy.
2) Add the icing sugar, salt and espresso - mix well. (Add small amount of Kirsch if too thick).
3) Cut the cherries from the soaking bowl into halves.
4) Put one the three cakes onto your serving tray/plate then spread half of the filling on top of that cake. Coat with cherries then place a second cake layer on top.
5) Spread the last half of the filling over that layer of cake, cover with cherries then place the last layer of cake on top.
6) Cover in wrap then let sit in the fridge for 1-2 days to let the Kirsch to soak into the cake making it extremely moist.

ICING (to prepared on the day you will serve the cake):

1) Place cream in bowl and with an electric mixer, whip until it peaks form.
2) Lightly fold in the dry milk and icing sugar.
3) Add the vanilla extract then slowly pour in the Kirsch until it's a smooth consistency.
4) Spread the icing all over the top and sides of the cake
Toppings: Place a handful of cherries on top, sprinkle with chocolate shavings, and dust with icing sugar. 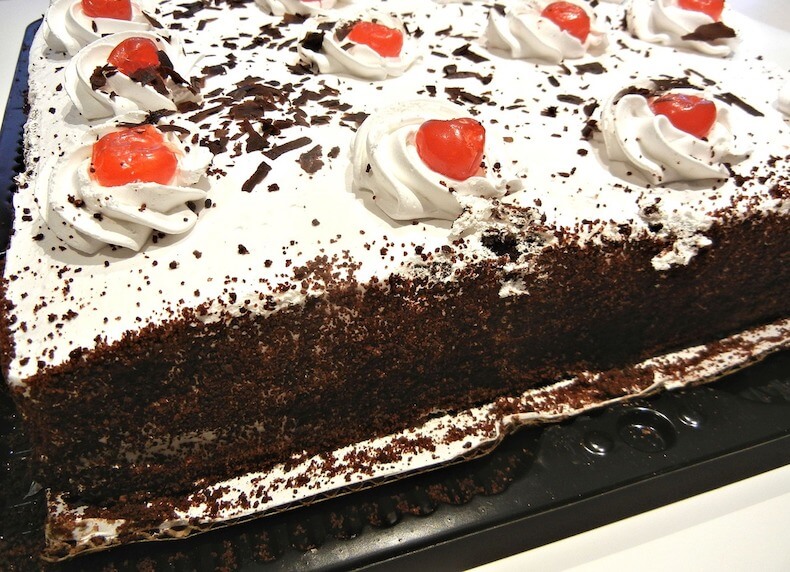 How The Black Forest Cake Came To Be

The Black Forest (or Schwarzwald) is a region in southwestern Germany. The Black Forest of Germany is known for abundance of nature and diverse landscapes. It is not uncommon for this area to be called “the most beautiful place in Germany”.

However, the Black Forest Cake is not named after the Black Forest region of Germany but rather one of the ingredients in the cake. Schwarzwälderkirschtorte in German, means Black Forest Cherry Torte or Gateau. The cake consists of multiple layers of chocolate sponge cake, cherries, and whipped cream. The name comes from the liquor Kirschwasser, that is used both to soak the sponge cake and infused in the whipped cream. This brings a rich moist flavouring to the cake.

Some historians believe the cake, in fact, got its name from the traditional outfit that was worn by women in the Black Forest. This attire consists of a black dress, white blouse, and a hat with red pom poms on top, all mimicking the chocolate shavings, cream, and cherries that top the cake.

During the 16 th century, chocolate began to be integrated into pastries in the Black Forest Region. Sour cherries were also starting to become popular in the area, which are the main ingredient for making the cherry brandy Kirschwasser – by double distilling sour Morello cherries. But the magical combo didn’t occur until a man by the name of Josef Keller came along. His first invention was “ Schwarzwaelder Kirsch ” (translation: “Black Forest Cherry”) in 1915. Keller later built his own café and eventually passed down his recipe book to co-worker August Schaefer.

Presently the recipe book with the original recipe for the renowned Black Forest Cake aka “Schwarzwaelder Kirsch” can be found with August Schaefer’s son, Claus Schaefer. In 1949 the Black Forest Cake took the title of the 13 th Best Known Cake in Germany.

Note: You should start preparing this recipe at least 1 day before you plan on serving, as the kirsch needs time to soak into the cake.