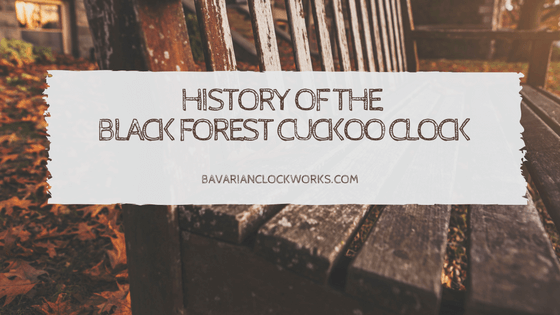 Who Made the First Cuckoo Clock?

Although the cuckoo clock’s origins remain unknown, evidence dates similar, though primitive, objects to the mid-17th century. The first known description of a coo coo clock dates back to 1629 when a German nobleman named Philipp Hainhofer described a clock belonging to Prince Elector August von Sachsen. In 1650, scholar Athanasius Kirche documented the elements of a mechanical cuckoo clock in an engraving in a handbook on music, Musurgia Universalis. In 1669, Domenico Martinelli penned a handbook on elementary clocks, Horologi Elementari, and described how the cuckoo call indicates the time.

The first Black Forest cuckoo clock is attributed to Franz Anton Ketterer, a clock maker from the village of Schönwald, who, inspired by the bellows of church organs, started incorporating the cuckoo’s sound into clocks. By the mid-18th century, many clock-making shops in the region were producing cuckoo clocks with wooden gears. Today, Ketterer is known as one of the founding fathers of the Black Forest clock making industry.

Where Was the Cuckoo Clock Invented?

The cultural icon was developed and refined by wood-carvers and German cuckoo clock manufacturers from the Black Forest, a 100-mile stretch of pine trees so dense the sun struggles to reach the forest floor. In the late 17th century, many farmers used logs from the forest to build cuckoo clocks to supplement their income during the winter months. To this day, Black Forest cuckoo clock makers preserve the rich history of the region, using the same means as their forbearers to hand carve cuckoo clocks known for their quality and craftsmanship.

How Are Cuckoo Clocks Made?

The history of cuckoo clocks dates back centuries. Cuckoo clock makers have been constructing clocks using the same time-tested mechanics and components of Black Forest cuckoo clocks from the 1700s.

The intricate carvings that decorate many cuckoo clocks start out as a block of wood. A clockmaker outlines the basic shape of the clock using a stencil and paint, then cuts it out with a jigsaw. Using up to 50 different knives, the artisan will begin carving the wood. Sometimes a case has no carving at all; instead, an artist paints an elaborate design. Other cuckoo clock cases have a combination of painting and carvings.

On the inside of the clock is a system of brass gears that keep time and trigger the cuckoo function. The components vary depending on whether it’s a one-day or eight-day movement. Every cuckoo clock also has two chains and two cast iron weights that regulate the speed at which the movement gears turn. To make the quintessential cuckoo call, air pumps in and out of two miniature bellows. Before each cuckoo, a hammer on the end of a wire hits a tiny gong. The number of cuckoos indicates the hour.

A cuckoo clock is deemed an authentic Black Forest cuckoo clock when the clock and all of its essential parts — everything from the clock case and the decorative details to the bellows and the mechanical movement components — have been handmade exclusively in the Black Forest region of Germany.

To learn more, watch this informative video on The Making of a Black Forest Cuckoo Clock, put together by the VdS. 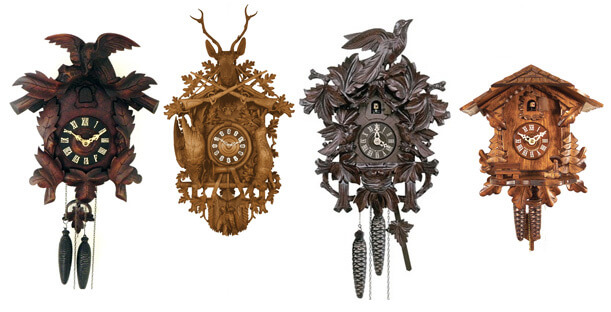 Are There Different Styles of Cuckoo Clocks?

Even though the functionality of the cuckoo mechanism has remained unchanged for more than 300 years, the case designs have evolved. The two most common cuckoo clock styles among collectors and buyers are the traditional-style cuckoo clock and the chalet-style cuckoo clock. Also referred to as classic or carved, the traditional style generally includes wildlife and nature in a traditional outdoor Black Forest setting. The chalet cuckoo clock is commonly associated with animated characters, such as woodchoppers, bell ringers, mill wheels and beer steins, as well as music. Other popular styles include the railroad house clock, also known as the Bahnhäusle Uhren; antique and vintage reproductions; shield-style clocks; and modern-style cuckoo clocks. With the modernization of the clock designs, there are a number of cuckoo clocks that are now made with battery powered operation, meaning there is no need to wind your clock every day or week. These battery powered clocks are called quartz cuckoo clocks and come in many different styles.