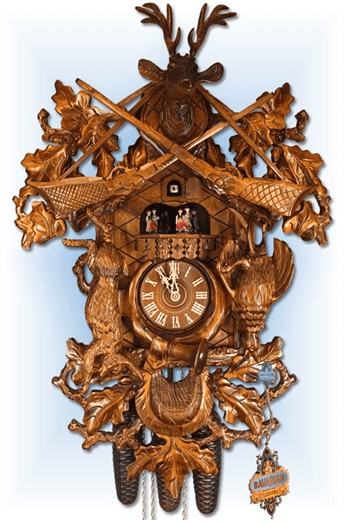 There are plenty of reasons why you might want to add a classic cuckoo clock to your wall. Whether your interests are cultural, historical, or you just want a nice piece of handmade decor to serve the dual function of a timepiece, a cuckoo clock is a great way to indulge those interests.

While there is still a level of uncertainty surrounding the precise origins of cuckoo clocks, the tradition of carving elaborate clocks in wood showcasing the likeness of a bird as a chime has strong ties to Bavaria in Germany. In Europe, time used to be kept by primitive means such as hourglasses and sundials, but one of the earliest mechanical clocks was a clock known as a wood beam clock that used wooden gears and stones for weights instead of a pendulum to keep time. This was a relative improvement over the primitive means that had prevailed previously.

One of the first attestations to a cuckoo clock was to a clockmaker from Germany by the name of Franz Anton Ketterer who, inspired by the mellifluous sounds of church organs, strove to incorporate similar sounds into the designs of his clocks. Though he was the first, clockmakers in his region started mimicking the design and by the middle of the 1700s chiming clocks that make a ‘cuckoo call’ with wooden gears had become prevalent.

Clockmaking was also a way for the rural inhabitants of the Black Forest region in southern Germany to supplement their income. They would create clocks from gathered wood carve elaborate designs into them during the winter season. Though it was common in that region at the time as a financial lifeline, it became a cultural tradition that continues to this day. In the current era, Southern Germany is well known for producing some of the most beautiful and lavishly decorated cuckoo clocks in the world.

Today’s Traditional Cuckoo Clocks offer the modern shopper some improvements over the models of the past. They are still meticulously graven or painted, though today they are built using brass gears instead of wood. It is important to note while shopping that a cuckoo clock can only be called an Authentic Black Forest Cuckoo Clock when all of its parts and constituents have been handmade in the Black Forest region of Germany.

If you’re interested in celebrating the rich traditional heritage associated with the production of cuckoo clocks, take a look at some of the following selections from our product categories. Typically, cuckoo clocks are broadly categorized into two categories - traditional cuckoo clocks and chalet-style clocks, although we will also investigate another category, modern cuckoo clocks.

Hand-Carved Cuckoo Clocks
Traditional hand-carved cuckoo clocks, also known as hunter cuckoo clocks, are some of the most popular in the world. They are hand-carved and often feature traditional black forest natural themes showcasing foliage and animal life. Aesthetically beautiful and grandiose, we offer one of the widest collections of exclusive traditional cuckoo clocks in the world. These clocks are often made in one day and eight-day configurations, denoting the length of time the clock will keep before having to be reset.

Traditional 8 Day Bears in Forest 25” Cuckoo Clock by Hones
Many cuckoo clocks are absolute emblems of intricate design and attention to fine detail, but this representative of an 8-day cuckoo clock stands out among them all. It is over two feet tall, 25 inches, not including the weights and pendulum.

This clock, with a walnut finish, showcases a wondrously sophisticated vista of a forest scene, detailed down to the foliage of the evergreen trees. Three bears are handsomely graven in exquisite detail into the scene, around which couples dance.

The weights are finished in stunning likeness to pine cones and the entire scene presents an uncanny realism. This clock offers an 8-day cycle, the cuckoo calls on the hour and on the half-hour and this clock comes with a night time shut off.

This beautiful Hones cuckoo clock is certified by the Black Forest Clock Association as an Authentic Black Forest Cuckoo Clock and comes with a certificate of authenticity as well as a two-year warranty from the manufacturer and free shipping.

Traditional 8 Day Classic Hunter 25” Cuckoo Clock by Rombach & Haas
This is another excellent representation of the unbelievable level of detail that some clockmakers invest in the creation of their world-famous musical clocks. Like the former model, it explores and showcases many traditional scenes from Black Forest life and celebrates that heritage. This clock, in particular, would make a fine addition to the home of a hunter as a testament to the rich heritage of the sport of the chase.

Among the many folds of its details can be found motifs and symbols celebrating the sportsmen of the region. Laid across a canvas of carved foliage can be found the crossed rifles of the hunter and beneath them are the spoils of the sport - a fowl and a coney. Above the rifles is the proud head of a stag, the ultimate trophy of the seasoned hunter, and a hunter’s bugle or horn gracefully encircles the centerpiece of the clock. As with the former model, there are the likenesses of cavorting and spirited figures about the balcony about the clock’s face.

This clock’s music box plays the classics Edelweiss and The Happy Wanderer, and the cuckoo in this clock calls on the hour and half-hour as with the former model. It also features a night time shut off and an 8-day cycle and stands nearly a full 25” in height.

This clock by Rombach & Haas is also certified authentic and comes with a certificate of authenticity and a unique identifying number. This clock also comes with a two-year warranty from the manufacturer along with free shipping.

Traditional 8 Day Trophy Buck 24” Cuckoo Clock by Hones
Here is another favorite by Hones that plays off of the traditional motif of the rural hunting lifestyle. This clock with a walnut finish appears somewhat less involved than the last model celebrating the chase, but its details slowly start to emerge as you spend a bit of quality time in visual investigation.

Crossed inverted rifles grace the front of this timepiece and above them, in accordance with the promise of its name, is a mounted trophy buck. Flanking the face of the clock are the falconer’s falcon and a hare, emblems of the sport, while above the clock cavort the customary characters. A bugle graces the clock’s face as in the previous instance - but this time from the bugle hangs the possibles bag of the hunter, the perfect complimentary piece to the smoke poles above.

This clock’s cuckoo calls on the hour and the half-hour and the clock has a night time shut off. This clock, like the others above, is hand-carved by skilled craftsmen and is certified by the Black Forest Clock Association as an Authentic German Cuckoo Clock. It comes with a certificate of authenticity and a unique identifier and comes with a two-year warranty from the manufacturer along with free shipping. 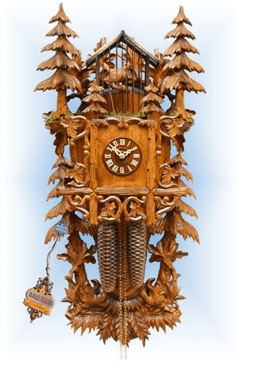 This traditional clock offers a beautiful hand-carved wooden likeness of a birdcage and offers a slightly more pronounced presence than some of the other clocks so far seen due to its larger size. The clock body is 31 inches tall, nearly three feet, so its presence on the wall is an underscore to the setting.

A reverent, hand-carved forest scene sets a wonderful background for the delicately traced bird and birdcage. Even the dial and hands of this clock are crafted skillfully from wood.

Stately, bucolic and graceful, this clock has even won the distinction of “Clock of the Year,” and it would be a fine addition to any setting where the warmth of wood and a little pastoral harmony might be welcome.

This clock is built to offer an 8-day cycle, the cuckoo calls on the hour and the half-hour and it features a night time shut off. As with many of our other hand-carved traditional clocks, this one is certified authentic, comes with a certificate of authenticity, and a two-year manufacturer’s warranty and ships for free.

Chalet Style 8 Day Bell Ringer 16” Cuckoo Clock by Hekas
This Chalet style clock is an iconic representation of the school in the form of an 8-day clock. It takes the grand form of an ornately detailed structure, sophisticated in design down to the shingles on the roof. It presents a carefully carved mill wheel and a miniature stack of logs, along with a Saint Bernard and some evidence of the local life and work.

When the bell ringer of this clock rings the bell the characters on the balcony come to life, dancing in traditional dress and the water wheel becomes animated. The music box plays ‘Edelweiss’ and ‘The Happy Wanderer.’ If you are looking for a Chalet style to put the emphasis on the beauty of the local culture of the region in which it was made, this is a fine choice.

Like traditional clocks, this Chalet clock is hand-carved by skilled artisans and is certified, coming with a certificate of authenticity and a unique identifier. It also comes with a two-year warranty from the manufacturer and free shipping.

Chalet Style 8 Day Black Forest Saw Mill 22” Cuckoo Clock by Adolf Herr
Walnut finished, this Chalet style cuckoo clock is another beautiful celebration of the rich culture of the region from which it came. Every bit as ornately detailed as the former model, this particular clock incorporates some additional interesting features giving it a touch of its own. The cuckoo on this clock, which calls on the hour and the half-hour, calls in conjunction with the sawyers, who animate the saw as the water wheel comes to life. At the same time, the traditional figures over the clock’s face on the balcony begin their dance. This clock is also beautifully finished with details including trees and dogs and cats.

Whereas the weights of many other similar clocks take on the beautifully executed form of pinecones, these are impressed with the image of conifers themselves. This clock is also certified authentic and comes with a two-year warranty and free shipping.

Chalet Style 1 Day Woodchopper 13” Cuckoo Clock by Hones
Although 1-day cuckoo clocks need to be set every day in order to run, our list here wouldn’t be complete without at least one representative of 1-day clocks, and this is a fine example. 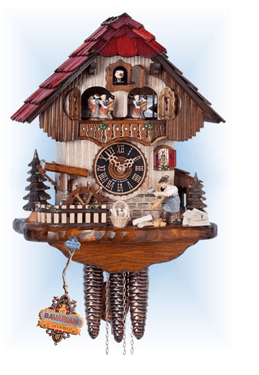 The detail of this clock focuses on the work of a woodchopper at work by the side of a mill with a balcony overlooking the scene, whereon dance traditional characters at the hour of the chime. The woodchopper and the mill wheel both move when the cuckoo calls, which occurs on the hour and at the half.

This clock, like the others on this list, is certified and uniquely identified. It comes with a two-year manufacturer’s warranty and free shipping as well, so if you appreciate its rustic charm, that’s plenty of reason on its own to add it to your interior design.

Though these are classic selections, there are many other beautiful clocks than these on our site, including other traditional and Chalet style cuckoo clocks, as well as vintage, shield, and modern cuckoo clocks. We have one of the largest collections of Authentic Black Forest Cuckoo Clocks in the world and the experience that only comes with years of dealing in the trade. Check out our collection on our website, and if you have any questions about our products give us a call at 900-950-6753.