Shopping for an authentic German cuckoo clock can mean choosing between decor, color, and style. You want the perfect clock for your space, the best cuckoo clock to evoke warm feelings of nostalgia and homeliness, but that doesn’t mean you should look past its function. 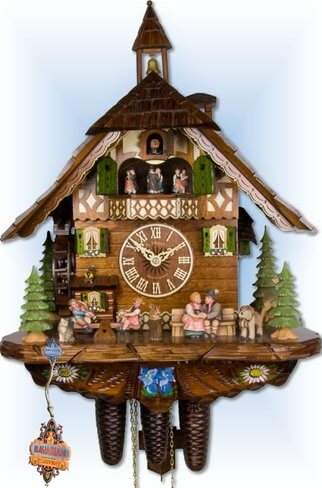 Cuckoo clocks are sold in all shapes and sizes, and are available in 1-day or 8-day clocks. Perhaps you’ve already seen these descriptions on many cuckoo clock purchasing pages and wondered which kind would best suit your style or home. Do 1-day clocks need more maintenance? Are music features only available on 8-day clocks? Let’s walk through the characteristics of a 1-day clock and an 8-day clock to find the best cuckoo clock for your space.

What’s the difference between a one-day and eight-day cuckoo clock?

The biggest difference between a one-day cuckoo clock and a eight-day clock is simple: it all lies in the amount of times you have to wind it up. A one-day cuckoo clock has smaller weights and needs to be wound once a day, or once every 24 hours. An eight-day cuckoo clock has larger weights and needs to be wound once a week. Luckily, it doesn’t matter the time of day you wind the clocks -- as long as you wind them before the weights drop to their furthest point, your clock will continue keeping time. The best way to keep track of this is to have a specific, consistent time during the day (for your 1-day clock) or week (for your 8-day clock) to wind up.

Do musical cuckoo clocks only exist in 8-day form?

This is a presumption based on the size of the 8-day cuckoo clock weights, but the good news is you can have a musical cuckoo clock regardless of your clock’s wind-up schedule.

Is the one-day cuckoo clock a more popular gift?

There are many factors to consider when purchasing a cuckoo clock, and whether to choose a 1-day cuckoo clock or a 8-day one is just one of several. As with any cuckoo clock, the choice ultimately comes down to a person’s preference. Budget is also a consideration since 1-day cuckoo clocks have smaller movements and are therefore less expensive. They are usually around $100 or less.

Do you want the classic, traditional look of a cuckoo clock to round out a warm living space? Then a vintage 8-day cuckoo clock is the one for you.

Or maybe you prefer the cuteness and quaintness of a modern clock to suit a busy room? A wooden 1-day cuckoo clock might be just the style you’re looking for.

A well-designed Black Forest cuckoo clock is the center of a room, so choosing one is no easy task. With 1-day or 8-day cuckoo clocks available, there’s a greater opportunity for shoppers to choose a clock based on their needs and preferences, their vision, and their unique style.