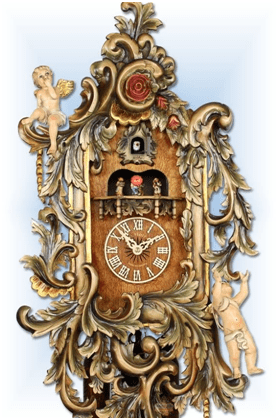 While some might imagine a cuckoo clock as any clock that contains a small wooden bird, calling at periodic intervals, there’s so much more to the rich history associated with their production. At Bavarian Clockworks, we’ve seen a lot of different clocks and have learned a thing or two, so check out some of these interesting facts about the history and production of cuckoo clocks to augment your search for a German Black Forest Cuckoo Clock.

1.They have been made for so long, no one knows exactly when the practice originated

Cuckoo clocks have been made for centuries in the southern Black Forest region of Germany; for so long, in fact, that their exact origins remain a mystery. We know it to be likely that the practice originated from enterprising Black Forest farmers looking to supplement their income through the winter months by selling handmade clocks, and that there are attestations dating back to the early 1600s, but just how long they have been produced is a mystery.

2.To be certified, they must be made in the Black Forest Region of Germany

An organization known in German as the Verein die Schwarzwalduhr (VdS) and in English as the Black Forest Clock Association certifies the production of authentic cuckoo clocks. Some clockmakers certify their own clocks too. For a German Black Forest Clock to be certified authentic by the VdS, it must be made in the Black Forest Region of Germany. The only exception is that the music boxes contained in some musical clocks may be made in Switzerland, as per tradition.

3.They must be made by hand

As per the regulations of the VdS, it is not enough for a  German Black Forest cuckoo clock only to be made entirely within the region; it must also be built by hand. There are no exceptions for this, and all parts, including the internals, must be built by hand within the region using time tested traditions. This brings up another interesting fact.

4.They are made of wood (with very limited exception)

The VdS takes this a step further. In antiquity, all cuckoo clocks were made entirely of wood, including the internal gears that powered the clock’s movement. As you can imagine, the very fine teeth and arrangement of the gears make this a challenge for even the strongest of woods, so as technology adapted, the gears and other internals were later made from brass. Today, a certified German cuckoo clock must still be made by hand from wood generally sourced in the Black Forest with the exception of the brass internals.

5.Authentic clocks require only the power of gravity

As electricity, and subsequently, batteries, are relatively modern inventions, and we know the history of Black Forest clock making to extend at least as far back as the 1600s, the first cuckoo clocks could not have been powered by electricity. Still, today, to be considered an authentic German Black Forest cuckoo clock , a clock must contain a mechanical movement. This consists of a weight, a pendulum, and a system of gears to power the clock and keep time. It’s not limited only to the movement of the clock, however; the cuckoo bird, and, in the case of musical clocks, the music box, is also powered by weights.

6.You can usually find them in 1-day and 8-day movements

7.There are many different styles of cuckoo clocks

Finally, there are many different styles of clocks, and not all of them are traditional, authentic styles. For example, here in our online store, you can find many examples of traditional, chalet-style, shield clocks, railroad clocks, and even modern cuckoo clocks that offer mechanical movements and thus can be certified authentic. At the same time, however, we offer many quartz cuckoo clocks whose movements are predicated on the oscillations of a small quartz crystal. Since these clocks do not contain mechanical movements, they cannot be certified authentic, but at the same time, they make a great choice for some people who appreciate the convenience of modern technology.

If you’re interested in adding some unique yet welcoming charm to your home with one of the many styles of German cuckoo clocks that you can find here at Bavarian Clockworks, you’re in just the right place. Not only do we pride ourselves on our peerless selection, low prices, and great service, but we are firmly committed to customer satisfaction and will help you find the ideal style, design, and movement to perfectly suit your tastes. Give us a call today at 800-950-6753 and we will be happy to help you find the perfect German Black Forest Clock.