For nearly 300 years, people in the southwestern Germany region known as Black Forest, or Schwarzwald, have been crafting world-class,  handmade cuckoo clocks. Although much has evolved since the 18th century, very little about how a cuckoo clock works has changed. Woodcarvers and clockmakers have preserved the art of handmade cuckoo clocks using the same mechanisms as their forbearers to produce the classic cuckoo call.

Why Does The Way A Cuckoo Clock Works Matter?

Knowing how a cuckoo clock works might not seem like an important part of choosing the perfect cuckoo clock; however, a cuckoo clock’s movement is not only the mechanism that drives the clock to keep time, but it also affects many other aspects of the clock.

How Does a Mechanical Movement Cuckoo Clock Work?

Preserving the art and tradition of the old  German clockmakers is evident in the way a mechanical movement cuckoo clock works. Not much has changed over centuries. From the animation to the music box, the mechanical cuckoo clock is driven by the weights powered completely by gravity.

How Does a Quartz Movement Cuckoo Clock?

Quartz cuckoo clocks can also play music. Typically how these cuckoo clocks works is by electronically playing one of 12 melodies each hour.

Every hour, a tiny wooden cuckoo bird emerges from the clock and makes its call. In mechanical movement clocks, two small wooden pipes are attached to two tiny wooden bellows, or air chambers, on either side of the clock. Air fills the chambers, as the clock's movement movement activates the bellows, squeezing the air in and out of the whistles. The first bellow makes the “cu” sound, and the second bellow creates the “ckoo” sound. The depth of the cuckoo calls vary depending on the size of the clock, bellows and pipes.

All cuckoo clocks will have a cuckoo bird. The cuckoo bird’s movement in and out of the door is also driven by the clock’s movement. In quartz movement battery-powered clocks, the sound and cuckoo bird movement is produced electronically. 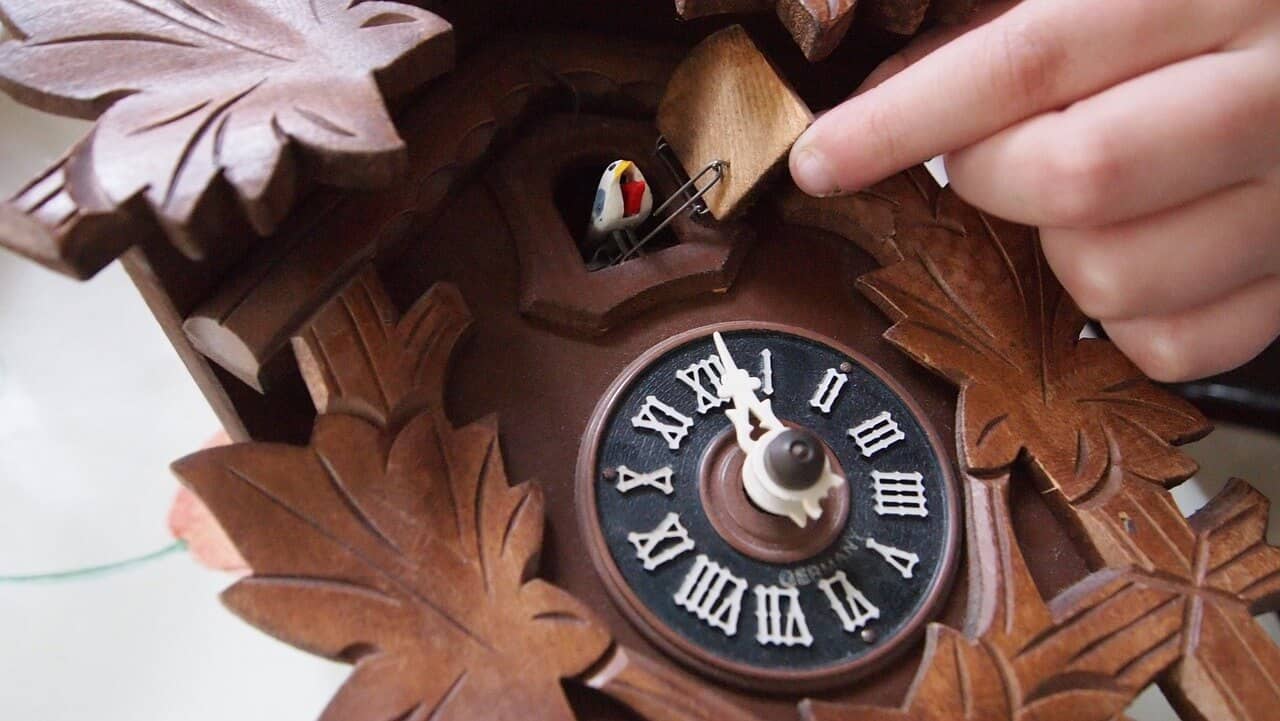 These days, people can choose from many different types of cuckoo clocks and choose one to their liking based on how the cuckoo clock works. Such considerations include style, personal taste, the number and detail of characters, the size, the music, the hand-carvings and paintings, and budget. To help guide your search for the perfect cuckoo clock for you, see our guide the " 7 Steps to buying an authentic cuckoo clock".

Most cuckoo clockmakers continue to produce clocks with mechanical movements following German tradition passed down for generations. They follow industry standards along with as do their suppliers. Many clockmakers source their movements from SBS Feintechnik, The world's largest producer of high-quality cuckoo clock movements, based in the Black Forest village of Schonach, Germany.

Although many things have changed in the past three centuries, cuckoo clocks continue to function much the same as they have over the centuries following strict quality standards. The present day VdS certification process helps ensure that authentic Black Forest Cuckoo Clocks will continue to be the  highest quality cuckoo clocks produced in the world. Hand-carved, handmade cuckoo clocks made from the Black Forest German tradition boast quality and craftsmanship that stands the test of time.