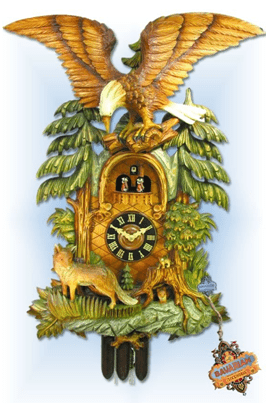 Even a cursory amount of research into cuckoo clocks will yield a wealth of information. There are volumes of historical information on the origin and construction of these wonderful styles of clocks, along with the many different styles one can find in them, the music they play, and the forms of operations they use. Pretty soon you will come to realize that a cuckoo clock is not as simple as the caricaturish version of one, a decoratively carved wooden clock with a small bird that sings at regular intervals. In truth, the history and lore behind them are far more complex than it would seem at first.

Considering that, you may have come across one of these clocks styled or termed as a coo coo clock and wondered if there was any discrepancy between the spellings. In summary, there is no difference between a coo coo clock and a cuckoo clock, and that the difference in spelling is either a mistake or incidental. Perhaps this disparity can easily be explained away but it requires a bit of background on the fauna of the old world.

Let’s take a look at why cuckoo clocks are named what they are named in the first place. Regardless of the design any one given clock takes, if it is to be called a cuckoo clock it must contain a small bird within the design of the clock. Usually, this bird occupies a recessed area of the clock’s case and above its face. In clocks that are designed to chime or play music on the hour and half-hour, these miniature birds emerge from the recess and sing their song, which is usually a two-note call that sounds like the voice of the eponymous namesake itself, the cuckoo bird.

The common cuckoo is a bird that inhabits most of Europe and is a relatively familiar sight throughout most of its range. It is a handsome bird with a flared tail that mimics the appearance of the sparrowhawk, and it has a very recognizable voice. During their nesting season, the male common cuckoo calls loudly in a two-note call that you might have been able to predict at this point. Birdwatchers and ornithologists liken the call of the common cuckoo to a stylized “goo-koo” or “coo-coo,” which is all too familiar. This is not unusual - many birds, and indeed some frogs and insects are named for their voices. Think of the katydid that breeds in the summer and is named for its strident, typically triply-noted call. Or consider many of the birds in our range that are named for their voices; the bobwhite, killdeer, and whip-poor-will, among others, occur throughout large areas of North America and are named for their calls.

The reason that the clock is called a cuckoo clock is clear at this point - it is named after the bird that is contained within its case. As for the name of the bird, that is evident from its call, and as for why the bird was chosen, it is likely to assume that it was a relatively common sight for people living in Germany where these clocks were traditionally made. In fact, even today, in order to be considered an authentic Black Forest Cuckoo Clock, one of these must be entirely handmade in the Black Forest region of Germany, with the exception of the music box which is permitted to be manufactured in Switzerland.

Back to the discrepancy regarding the name; as the name of the bird itself is a backformation of the sound of its call as interpreted by listeners, throughout history there have been different stylings of the call. Today the bird is accepted into standard English, but as the call has been transcribed using more than one spelling, coo coo may be an alternative spelling for the sound of the bird's call, or simply a mistake. Regardless, you are liable to come across this spelling periodically, even though the more formal spelling is far more common. Suffice it to say that despite this long explanation, there is no significant difference between the two names. They are simply alternative spellings. So then, what of some of the different types of cuckoo clocks?

Operation of a Cuckoo Clock
As mentioned, to be considered an authentic Black Forest Cuckoo Clock, there are some very stringent requirements set out by the Black Forest Clock Association, or the Verein die Schwarzwalduhr, also known as the VdS. Many years ago, in the early days of clockmaking in the Black Forest Region, the clocks were made entirely from wood, and of course, entirely by hand. That does not specifically limit the handiwork to the case of the clock - originally the entire clock, including its internal gears and mechanisms, was made of wood. Advances in technology have made more resilient materials like brass available and these are nowadays the norm.

However, Black Forest Clock Association certification still requires all clocks to be made in the Black Forest Region to be made by hand from wood, with the exception of the internal brass movement. The music boxes may be made in Switzerland. However, all carving and assembly must still be done by hand in the Black Forest Region. In addition, to be considered authentic, these clocks must possess a mechanical movement, which stands in contrast to the quartz movements that are so common in modern clocks. 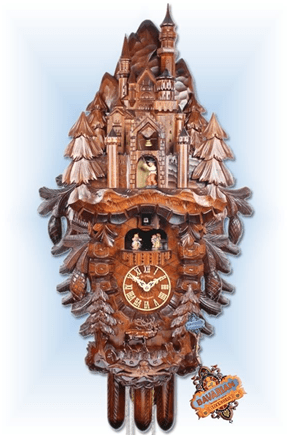 A clock based around a mechanical movement is powered by gravity instead of electricity and therefore needs no power besides the potential energy of gravity in order to keep time. Gravity powers not only the movement of the clock but also the movements of the cuckoo bird and characters within the case, along with the music or notes the clock plays.

A system using weights and a pendulum is all the power that is needed to keep time and actuate a mechanical clock. The weights of an authentic cuckoo clock, which are traditionally made in the form of pine cones, and clocks typically contain two or three weights.

With respect to the activation of the little cuckoo bird that these clocks often contain, this is driven by the power of the weights as well. Most clocks contain a little cuckoo that emerges on the hour and makes its signature call, a ‘cuckoo’ sound, somewhat reminiscent of the voice of its namesake.

The cuckoo birds movement in and out of the clock is powered by the weights, as is the call. There are two bellows and two pipes on the clock. Each pipe is designed to make one note of the call, either a “cu” note or a “ckoo” note. When the bellows release air through the pipes in accordance with the weights that power them, the pipes vibrate and make these sounds. The sounds vary with the volume of air as well as with the measurements of the pipes.

As the weights pull on the chain gear, their descent is regulated by the movement of a pendulum that keeps rhythmic time. The pendulum swings at a constant rate so from that time can be derived in the form of seconds, minutes and hours. When the weights get to the floor, they simply have to be rewound and the clock will continue keeping time. In fact, as long as the clock is rewound before the weights drop fully, the clock will continue to keep time and will not need to be set. Considering this, there are two main types of clocks that are powered by a mechanical movement.

1 Day and 8 Day Clocks
You will often see authentic clocks labeled either as 1-day or 8-day clocks, but don’t be intimidated by this distinction. It’s even simpler than it sounds and can be easily explained. Basically what it boils down to is the length of time (or close to the length of time) that a clock can keep time before it needs to be rewound.

A 1-day cuckoo clock, as its name might suggest, cannot keep time for much longer than a day. In other words, if you wind up the weights fully, they will reach their lowest point within around 30 hours and therefore must be rewound within that time frame in order for them to continue to keep time. If you can remember to rewind the clock before the weights wind down, this is generally a more affordable option to 8-day alternatives. A good way to work with this is simply to remember to wind your 1-day clock at the same time every day. That will prevent the clock from stopping, and moreover, will enable the clock to keep time without having to be reset. In addition, 1-day clocks tend to be smaller and weigh less than other 8-day clocks.

By contrast, 8-day clocks can keep time for about a week or 7 days. That is, you need to remember to wind them up at least once per week in order to enable them to keep time. Examples in 8-day clocks tend to be significantly larger and heavier than styles of 1-day clocks, though they do not require as much attention. Like a one day clock, consistency is key. Just pick one time each week to remember to wind the clock and the clock will continue to keep time for you.

Quartz Movement Clocks
With all of this talk about the different types of mechanical cuckoo clocks and how they work, it can be easy to forget that there are other options for those looking for the appeal of one of these clocks without the hassle of winding, or the expense associated with traditional clocks. Although a clock must contain a mechanical movement in order to be certified as an authentic Black Forest clock, there are other styles available to modern consumers, including quartz cuckoo clocks. 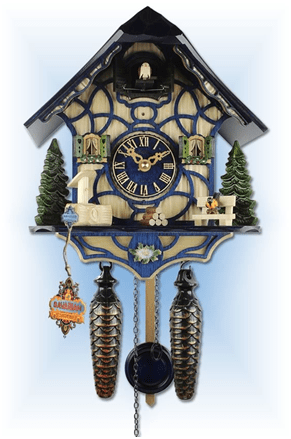 Whereas mechanical clocks are powered by gravity and a pendulum and thus must be wound, quartz clocks use the power of electricity and the precision of quartz in order to keep accurate time.

The basis by which a quartz clockworks is actually fundamentally the same as a mechanical clock, although the methods of going about it are different. With a mechanical clock, the pendulum swings at a rhythmic speed. With a quartz clock, batteries within the clock feed electricity through a quartz crystal, which vibrates as the energy travels through it as a part of a circuit. The quartz vibrates very rapidly, at almost 33,000 oscillations per second, but very predictably as well. The electronic components then calculate the time as a function of the vibration of the crystal. They have the potential to be very accurate and very affordable. After all, quartz is extremely precise, and despite the apparent complexity of this system, one of the most common minerals on earth.

Although quartz clocks do not qualify for VdS certification because they are not powered by mechanical movements, there are some cuckoo clock makers that still produce high-quality clocks with a very traditional appeal. They are a reasonable alternative for those who do not wish to have to remember to wind their clock every day or week.

If you’re looking for a cuckoo clock, or a coo coo clock, as some might call it, please take some time to look through our collections of traditional clocks, Chalet style clocks, vintage clocks and modern cuckoo clocks for sale. We’d be more than happy to go over the specifics of different styles of clocks as well as clock operation and help you settle on the perfect clock for your home. Check out our guide on how to buy a cuckoo clock, or give us a call at 800-950-6753 for more information.