You can find German cuckoo clocks for sale all over the world. Finding a quality and authentic clock can be challenging with so many cheap imitations on the market.  Producer standards, practices, origin, and reputation are all important factors in the measure of quality.

Germany’s southwestern region known as the Black Forest or Schwarzwald has been producing authentic cuckoo clocks for nearly 300 years. Schwarzwald is the well established home of the cuckoo clock. Black Forest wood carvers and clockmakers alike are considered to be the best in the world. These past and present craftsmen built the standard by which all coo coo clocks are measured.

In an effort to preserve the art, integrity and standards of fine cuckoo clock making the Black Forest Clock Association was formed.  Also known as VdS or Verein die Schwarzwalduhr, this group of producers, traders, and cuckoo clock experts sought to formalize the strict practices the region is so well known for. Together they created a certification process designed protect the Black Forest tradition and represent quality around the world.

To the credit of association, all authentic Black Forest cuckoo clocks are delivered with an official certificate. The VdS certificate of authenticity represents quality through origin, mechanics, components and construction. A certified cuckoo clock owner can be sure that their clock was built using the same time-tested traditions that have made the region world famous.

STEP 2: PICK A STYLE OF CLOCK

Like most things we enjoy in life, selecting the perfect German cuckoo clock comes down to a matter of personal taste.  Choosing a style that is right for you will quickly narrow your search. It keeps the experience fun and interesting. Now let’s figure out which clocks suit your taste and style. 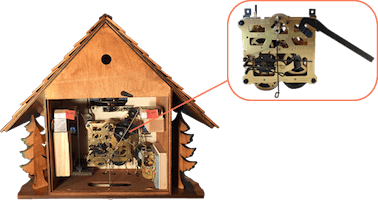 Selecting a movement may not be the most exciting step in finding the perfect cuckoo clock, but it is certainly one of the most important.

Let’s review the two standard movement types to find out why:

Powered by weights and gravity, the hard brass movements do not require electricity to function making them eco-friendly. Once made entirely of wood, these movements have been used in black forest cuckoo clocks for centuries.

Most cuckoo clock craftsmen today use industry standard REGULA movements by SBS Feintechnik.  SBS operates in the Black Forest village of Schonach, Germany and is known throughout the region for its high quality clockworks.

Quartz movements provide a reliable alternative to their mechanical cousins. These movements are battery operated and are most often found in clocks of the lower price range.

Music, movement and animations in quartz cuckoos are electronic simulations of the mechanical cuckoo clock. Maintenance is simple and usually limited to changing batteries.

Music has been an important part of cuckoo clock making since the early 18th century. Watching characters come alive and dance to German folk songs is a must for many collectors.

While the tunes are German, the music box is the only part of an authentic cuckoo clock manufactured outside of the Black Forest. Swiss music boxes have been placed in these famous clocks for generations. The Reuge Company founded in 1886 supplies many respected Black Forest clock makers and ranks highly among collectors.

Musical tones (notes) range from 18 to 36 notes in most clocks. The more notes a musical movement has the richer the quality of the music. 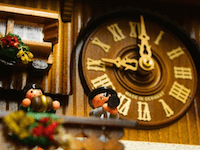 A chance to see the cuckoo bird come out of hiding is enough to capture the curiosity of most anyone. Add that to a chorus of “The Happy Wanderer” while characters come to life and you have the stuff dreams are made of. Some clocks finish their lively display with the cuckoo’s call while others take you through the motions of wood cutters, bell ringers, or a even a lover’s kiss as dancers take the stage.Here are a few tips to help get you animated:

As with most things in life, you will find exceptions to every rule. Just remember to have fun and enjoy the process!

There is nothing that can dampen the experience of owning a cuckoo more than being woken up in the middle of the night by it. Taking time to understand the characteristics of a clock and how to control them is a very important part of becoming a happy cuckoo clock owner. Understanding how to silence a clock as needed is often overlooked.

A manual shut-off requires that you manually set a switch to the off position to disable the sound of the clock. The clocks sound will remain off until you manually change the switch back to the on position.

Finding an affordable cuckoo clock is easy. Getting a quality clock that fits your budget and style takes some effort. While affordable, factory made imitations lack the quality and character of an original Black forest cuckoo clock. There is simply no substitute for the real thing. Authentic cuckoo clocks are in their third century of production for good reason.

Unless you are looking for a novelty clock, a collectible Black Forest original is your best bet. These hand-made clocks start at around $150 for a nice 1-DAY cuckoo clock and can reach $3000 or more for a beautifully detailed work of art.

Here are few tips to help you stay within yours:

Start with style, adjust based on budget and enjoy the process!

A NOTE ON PURCHASE OPTIONS FOR AUTHENTIC GERMAN CUCKOO CLOCKS